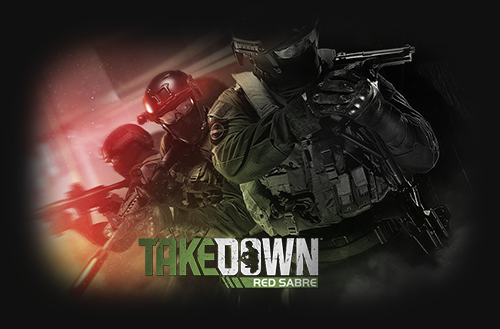 
"This game, the spiritual successor to games like the original Rainbow Six and SWAT series, will focus on realistic weapons modeling, squad based play, in a close-quarters battle setting. To succeed in this game you need to take things slow, study your plans, and execute flawlessly. If you get shot, there are consequences."
(Quote from the official Takedown website)

Most of you probably already experienced or heard that the release version of TakeDown suffers from some serious bugs and a lack of certain features. Nevertheless the game already offers some solid, realistic gameplay, and we are going to test our tactics in this new, challenging environment.
We are currently working on a dedicated server to facilitate tactical gameplay 24/7, but the support and configuration options so far are very limited. Moreover we will search a training map suitable for our needs and develop a basic training program. But most likely we will not start to recruit in TD until some major issues are fixed (in particular the networking stuff and possibility to change your loadout during the briefing).
Keep your fingers crossed for some helpful patches coming out soon.

Update: Squad closed. Unfortunatly the game still has not the necessary quality for realistic gameplay, and it's questionable whether it will ever reach this.